South Australian magistrate Robert ‘Bob’ Harrap has been charged with deception offences after an investigation by the state’s Independent Commissioner Against Corruption (ICAC).

“It will be alleged that on two occasions between 19 May 2020 and 22 May 2020, Magistrate Harrap misrepresented who was driving his government issued vehicle at the time it was observed committing traffic offences and thereby engaged in deception in order to obtain a benefit for himself,” ICAC commissioner Bruce Lander said in a statement.

“It will also be separately alleged that between 10 May 2020 and 29 May 2020 Magistrate Harrap conspired with another person to pervert the course of justice and conspired to abuse his public office in relation to a matter that was to be heard by him and was heard by him.”

Commissioner Bruce Lander said the investigation was ongoing and he expected other charges to be laid and other people to be charged.

Lander said he had taken the unusual step of naming Harrap because “not naming the judicial officer would harm the confidence the community necessarily places in the judicial system”.

Harrap has been bailed to appear in Adelaide Magistrates Court on 6 July 2020.

Chief Magistrate Mary-Louise Hribal said Harrap would not sit or conduct any court business until the matters against him had been finalised.

“Accordingly, I have directed that Magistrate Harrap take leave until the charges against him have been determined according to law,” Judge Hribal said in a statement.

She said it was also not appropriate for any other magistrate to hear the matter so she had asked for a judge of the District Court to preside over his case.

The vehicle-related offences are rather ironic given Harrap was not exactly known for his benevolent demeanour towards people appearing before him to challenge traffic fines.

The irony is heightened further by the fact Harrap presided over a hearing involving disgraced SAPOL Senior Constable Kristian Martin, who in February 2012 pled guilty to aggravated assault and dishonestly dealing with documents.

Martin had falsified police records between February and April 2011 at Norwood to evade speeding fines. He tried to claim exemption from the fines by falsely stating he was on duty at the time he was photographed by speed cameras.

Other not-so-bright endeavours by Martin included bashing Jozef Kalmar in Rundle Mall on 24 July 2011. Martin struck Kalmar with a police-issue baton after Kalmar had already been detained. Despite the offence occurring in a prime CBD shopping strip with abundant CCTV coverage, Martin had initially attempted to claim he acted in self-defence. 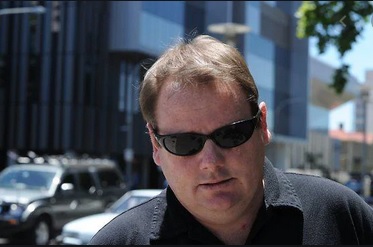