In a first for South Australia, these officers will also carry semi-automatic assault rifles while patrolling public spaces, even when no evidence of a specific threat exists.

Police have previously said the SRS would provide “an extra layer of protection” at events where “large crowds gather”. By definition, this would include everything from family entertainment events to peaceful protest rallies and marches.

Many are not convinced by SAPOL’s “it’s for your own good” rationalizations, and instead see the new SRS unit as simply an escalation in SAPOL’s attempts to intimidate and frighten an increasingly skeptical public into compliance.

Increasing public awareness of police brutality and racism by SAPOL officers has also done little to reassure South Australians about the wisdom of endowing police with military-grade weaponry.

Nor has the recent opposition by Police Commissioner Grant Stevens to reconsider the shoot-to-kill policy of SAPOL’s other tactical response group, the STAR Group. When SA’s deputy coroner Anthony Schapel merely requested (not ordered or demanded) for SAPOL to re-examine its policy, Stevens became so offended he (unsuccessfully) launched unprecedented legal action to have Schapel’s report amended. 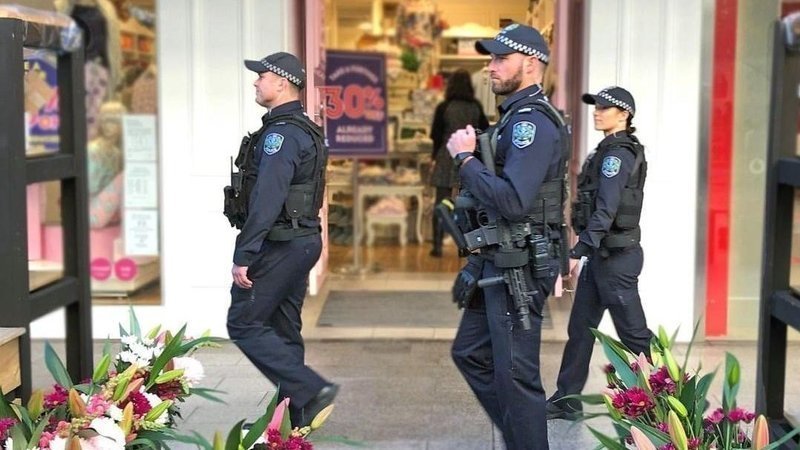 The STAR group’s long history of thuggish behaviour further adds to concerns about the addition of yet another heavily armed SAPOL ‘tactical’ unit. Among the STAR Group’s infamous ‘achievements’ is the disgraceful 2001 ‘Beachport Brawl’ with the Gypsy Jokers MC. The brawl erupted after the STAR force did all it could to engineer a confrontation with the bikers, who were drinking at the Beachport Hotel during their annual club run. According to hotel staff, fellow patrons and even local police, the bikers were behaving amicably and not causing any trouble.

The same could not be said for the STAR Group. While attending an unrelated incident at a nearby town, they learned the bikers had congregated in Beachport. After descending upon the town, STAR force officers began shoving a Gypsy Jokers nominee member and kicking over the bikers’ prized motorcycles.

When even this failed to sufficiently provoke the bikers, STAR Group officers then swarmed the hotel. At this point, the bikers’ patience was finally exhausted and the STAR Group got the confrontation they were itching for.

The STAR Group also got something it hadn’t planned on: A thorough beating. The group’s commander suffered a broken jaw and his hat was taken and worn by late Gypsy Joker member Steve Williams as he fought on with other STAR force officers. After the fracas was over, many of the STAR Group members required medical assistance and some were hospitalized.

Williams and eight other club members were charged with various offences. In February 2002, Williams received an 18-month suspended jail sentence, reduced to a $100 fine and a three-year good behaviour bond. This very light sentence reflected the considerable provocation to which Williams and his comrades were subjected to by the STAR Group. All charges against the eight other bikers were dropped.

Rather than learn from the experience, the STAR Group has not wavered from its jack-booted approach.

On 8 January 2009, innocent Paralowie man Steven Holder was assaulted in his own backyard by the STAR Group. The assault was unprovoked and wholly unjustified as at no stage was Holder ever suspected of committing a crime or under arrest. On 3 August 2018, after a long battle to hold the STAR Group accountable for its violent and unwarranted behaviour, a South Australian judge awarded Holder $135,000 in compensation.

The rest of SAPOL also leaves much to be desired in its treatment of unarmed civilians. In May of this year, taxpayers were again forced to foot the bill for SAPOL’s violent tendencies. The heavy-handed force was ordered to pay over $700,000 in compensation for the unlawful arrest and battery of a man in the Adelaide CBD. During the unlawful attack, officers pepper-sprayed the man and then placed him in a nasty figure-four leg lock, breaking the man’s thigh.

As is par for the course with SAPOL, the offending officers presented the court with a version of events starkly at odds with what CCTV footage really showed.

More recently, Commissioner Stevens was forced to go into damage control mode when footage of SAPOL officers restraining and punching an unarmed Indigenous man went viral. In a 19 June 2020 Advertiser editorial, Stevens implored the public to “Look at facts before judging arrest video.”

Yes, let’s look at the facts.

The facts of the matter were that the victim of the police assault, Noel Stevens, had not done anything wrong. The offending officers claimed they suspected Stevens of possessing illegal drugs, but no drugs were found on him. Stevens was arrested using the time-honored SAPOL catch-all charges of hindering police, resisting arrest and property damage. The validity of these charges can be gleaned by the fact Stevens was quietly released without charge the following morning via the “back door” of Port Adelaide police station.

Any move to increase the power and armory of SAPOL members needs to be considered in light of SAPOL’s remarkably flippant attitude towards police brutality. Late last year, SAPOL Senior Constable Ben Higgins was caught red-handed on camera delivering a textbook classic sucker punch to a man already being held by two other officers and whose hands were handcuffed behind his back. Higgins attempted to claim the man spat on him, but the video footage clearly shows the man leaning away from Higgins to spit on the ground.

Commissioner Stevens’ response was to congratulate Higgins on a job well done.

Another case in point was the truly disgusting and vicious 2012 beating of two homeless men in Whitmore Square by Constable Matthew Schwarz. Disturbing video footage of the incident shows a frenzied Schwarz literally tripping over himself in order to bash both men. In addition to striking them with his baton, Schwarz also struck the men with his elbows and fists.

What did the two men do wrong?

As Magistrate Stefan Metanomski later confirmed, Schwarz simply became offended when the men refused to talk with him – as was their legal right.

Despite the fact TV news footage clearly showed Schwarz was the aggressor, SAPOL arrested the two homeless men and charged them with assault!

Magistrate Metanomski acquitted the two homeless men and chided Schwarz for “embellishing” his version of events.

While this saga was playing out in court, it was revealed a second complaint of aggressive misconduct had been made against Schwarz. This time, a teenage P-Plate driver complained the belligerent officer had thumped on her car window and threatened her.

Despite his unprovoked violence and belligerent attitude, SAPOL did not terminate or even suspend Schwarz’s employment. The Police Ombudsman called for Schwarz’s police ID to be revoked in the interests of public safety but Commissioner Stevens refused.

Schwarz faced no punitive measures for his brutality. Instead, the public was supposed to feel sorry for him. The Director of Public Prosecutions’ excuse for not bringing criminal charges against Schwarz was because the heavy-handed officer was allegedly in a “fragile and suicidal state of mind.”

The poor dear. One can only wonder how the bashed and maliciously prosecuted homeless men must have felt?

Matthew Schwarz bashing two unarmed homeless men, despite them laying on the ground and offering no resistance.

In his Advertiser editorial, Stevens said, “There is no place for police misconduct.” The sincerity of this comment should be judged against the backdrop of Stevens’ remarkable leniency towards officers caught red-handed engaged in the kinds of assaults that would almost certainly result in prison terms if committed by ordinary civilians.

Strike out in exasperation at someone who has been harassing, threatening and stalking you for years on end, and both SAPOL and the judiciary will piously tell you there was “no excuse” for your behaviour.

But when SAPOL officers become violent after what they consider a personal slight that has caused them transient emotional upset, Grant Stevens refuses to reprimand them, let alone criminally prosecute them. In the case of Ben Higgins, he even issued a public statement of praise.

When Matthew Schwarz beat the bejesus out of two homeless men while they lay on the ground, the DPP refused to charge him because he was allegedly in a “fragile, suicidal” state. But no such concessions are granted to civilians facing prosecution while (genuinely) suffering similar emotional states. And despite Schwarz’s alleged mental instability, SAPOL refused to even suspend him from duty.

Is this really the kind of police force we should be allowing to openly roam Adelaide streets, shopping precincts and entertainment events with military-grade assault weapons?

Dear SRS: Pack It Up and Pack It in, SA Doesn’t Want You

Given SAPOL’s longstanding penchant for excessive force, it is not surprising the new SRS unit has been met with a barrage of criticism. SAPOL claims it was forced to switch off comments on an Instagram post spruiking the SRS because “people were using abusive and offensive language”.

An online petition has been launched calling on SA Police and the State Government to “immediately and permanently disband” the SRS.

The petition’s creator, Ripley Newbold, said he started it after he saw images of police officers holding assault rifles in Rundle Mall.

“I couldn’t quite understand why we would need something like that,” he said.

“I felt the justification SAPOL has given for their existence, it’s really flimsy at best.”

Natalie Wade, from the group Australian Lawyers for Human Rights, acknowledged the need to protect the public from terrorism, but also expressed concern.

“It’s something we haven’t seen a lot of in Australia,” she said.

“It’s perhaps something Australians have seen in the media in America and other countries around the world, but it’s a foreign concept to the way Australia has been policed in the past.”

As of this writing, the petition has been signed by almost 8,000 people, and has gained traction on social media platforms.

The petition can be accessed and signed at this link:

Mr Newbold said it was “disturbing” to think that the force would patrol the streets of Adelaide.

“The message they need to send is: ‘we’re here to protect the community’, and the message that it sends is: ‘I’m ready to shoot the second I feel threatened’,” he said.

“That’s not the type of policing I want in my community.”

Police on Friday defended the unit, saying it would significantly bolster public safety.

“Security Response Section has been established to protect the community of South Australia,” Stevens said.

According to a 4 July 2020 Advertiser article, “A police spokesman was aware of the petition but said ‘our position has not changed.'”

Instead, South Australians are expected to put up and shut up. The SAPOL websites declares: “The presence of SRS will be routine at crowded places – it will not be an indicator that there is a specific danger or threat.”

“Their presence is as much about prevention as it is to respond to an incident should it occur. You can expect to see them at places like the Adelaide Railway Station, Adelaide Oval, Central Market, and Rundle Mall.”