Meet South Australia Police (SAPOL) officer Constable Matthew Schwarz (pictured above), who bashed two unarmed homeless men using his elbows, fists and baton. As a magistrate later confirmed, the men had done nothing wrong. Schwarz simply became offended when the men refused to talk with him.

As Magistrate Metanomski noted, it was the men’s legal right not to engage with the antagonistic Schwarz. Unfortunately, SAPOL and many of its officers have somehow convinced themselves they are God-like entities deserving of unquestioning obedience. When people fail to treat them with the reverence they believe they are entitled to, many SAPOL officers promptly begin behaving in a highly unbecoming manner.

And so it was on 5 December 2012, when the two homeless men, Shaun Robert Jones and Christopher John Mackie, made it clear they did not want to speak with Schwarz. The SAPOL officer flew into a rage and began viciously assaulting the men in Whitmore Square, in full view of onlookers and a Channel 7 film crew.

Here is video footage of part of the incident:

There’s no denying the contents of the above video: Two SAPOL officers standing over two unarmed men who are lying on the ground, with the male officer – Matthew Schwarz – bashing them with his baton. Schwarz seems in such a frenzied state he can be seen literally tripping over himself in order to bash the men.

The full Channel 7 footage of the incident, along with comments from witnesses, can be viewed here:

The incident caused a furore after it was aired by television and online media outlets.

If anyone else launched a vicious assault on two innocent homeless men in full view of bystanders and a TV crew, they’d earn themselves a guaranteed – and well-deserved – ticket to prison.

But when SAPOL officers assault someone, the rules suddenly change. When Schwarz’s SAPOL buddies arrived on the scene, they didn’t arrest him – they instead arrested the innocent homeless men who had just been viciously bashed by Schwarz! 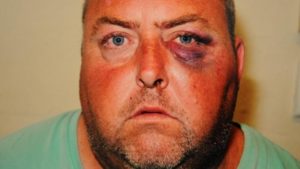 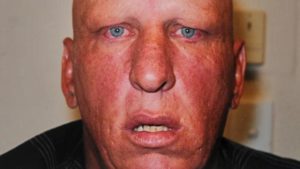 Photographic evidence tendered to the court of Christopher John Mackie (top) and Shaun Robert Jones (above) with injuries sustained from Schwarz’s assault.

SAPOL prosecutors knew what really happened, but instead of dropping the charges against the homeless men and charging Schwarz, they did the exact opposite. They threw their full support behind Schwarz and forced the homeless men to stand trial.

Needless to say, forcing two traumatized assault victims to stand trial on false charges of assaulting the man who in fact bashed them was an incredibly low act. 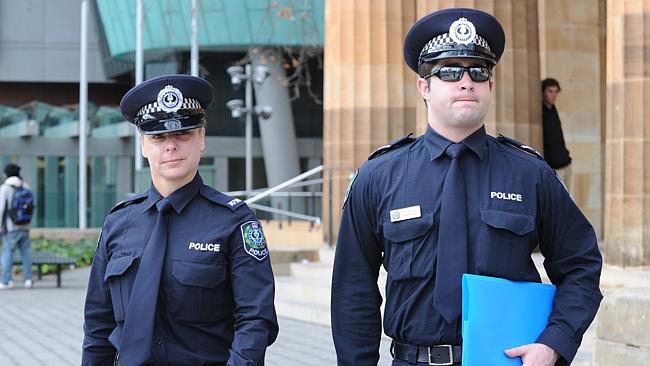 Schwarz, right, and his SAPOL sidekick Jennifer Clarke, left, during the trial.

On 29 May 2014, Magistrate Stefan Metanomski dismissed all charges against both homeless men. The magistrate found the police had “exceeded their authority” when dealing with the men.

Magistrate Metanomski found Schwarz acted unlawfully by continuing to pursue the men after they made it clear they did not wish to speak with police. He noted the officer did not reasonably suspect the men of any crime and therefore had no authority to follow them.

Along with exonerating the homeless men, Magistrate Metanomski said he found Schwarz’s version of events to be inaccurate and unreliable, finding there was a real possibility the officer was embellishing his story (in plain English: lying) to justify his actions. Even though the incident was caught on camera and widely broadcast, Schwarz still tried to “embellish” his version of events. And as he did so, SAPOL stood loyally behind him.

That is how terribly deep the dishonesty at SAPOL runs. Even when they are caught red-handed on camera viciously beating defenceless people, and even when their thuggish antics are broadcast on the evening news, they still try to lie about what happened.

While this saga was still playing out in court, it was revealed a second complaint of aggressive misconduct had been made against Schwarz. This time, a teenage P-Plate driver complained the belligerent officer had thumped on her car window and threatened her.

Despite his unprovoked violence and dishonesty, SAPOL did not terminate or even suspend Schwarz’s employment. The Police Ombudsman called for the Schwarz’s police ID to be revoked in the interests of public safety but Commissioner Grant Stevens refused. This was the same Commissioner Grant Stevens who, in response to a report showing endemic sexual harrassment within SAPOL, solemnly pronounced SAPOL “must show we are committed to preventing inappropriate behaviour, supporting victims and investigating complaints and taking action as appropriate.”

So much for fighting inappropriate SAPOL behaviour and supporting victims. The reality is SAPOL endeavours to conceal as much of its bad behaviour as possible, instead harassing, arresting and prosecuting its victims.

The Director of Public Prosecutions’ excuse for not bringing criminal charges against Schwarz was because the heavy-handed officer was allegedly in a “fragile and suicidal state of mind.”

Which, of course, begs the obvious question: Why on Earth was a mentally disturbed SAPOL officer who was “fragile and suicidal” allowed to continue carrying a gun and other weapons while circulating among the general public?