A man maliciously charged with assault after being viciously assaulted by police was acquitted yesterday.

A favourite trick of South Australia Police (SAPOL) is to assault people, but then falsely claim self-defence and charge the victims with assaulting police – a disgraceful ruse known as malicious prosecution.

This is the situation 43-year old Nathan Cross found himself after being arrested and taken to Victor Harbor Police Station on 4 February 2017.

As he was taken to the station’s charge counter, Cross had his hands cuffed behind his back and was surrounded by four officers.

Suddenly, the officer patting Cross down placed his hand behind Cross’ head and violently rammed it face first into the counter. As the video below shows, the impact knocked Cross out cold.

In an attempt to cover their malfeasance, when the officers called for an ambulance they dishonestly claimed they had an “aggressive” prisoner who “tried to fight us, and he was then taken down”.

The officer responsible for ramming Cross’ face into the counter was none other than Senior Constable Ben Higgins, the same gutless thug who sucker-punched 22-year old Craig Yates last year under similar circumstances: Yates was handcuffed with his hands behind his back and being restrained by two other officers when, without warning, Higgins coward-punched him to the face.

To justify his cowardly assault on Cross, Higgins claimed he feared “he was going to be spat at” and “headbutted” by Cross.

As Magistrate Sue O’Connor pointed out, the video footage shows no indication that Cross was going to spit or headbutt Higgins.

The video also makes a mockery of Higgins’ claim in his evidence that “I pushed [Cross] away to prevent him from assaulting me; he fell forwards towards the charge counter.”

Cross did not fall: He was violently propelled into the counter by Higgins.

Higgins took a similar creative approach when defending his coward-attack on Yates. He claimed he only punched Yates because Yates spat on him, but the video link below shows this is a blatant lie. Yates can be seen in the video clearly leaning away from Yates and spitting on the ground, not on Yates.

After coward-punching Yates, but being cleared by SAPOL’s self-serving and nepotistic ‘internal review’ process, Higgins was praised by SAPOL Commissioner, Grant Stevens. “My officers should not tolerate being assaulted and I expect them to take reasonable action to protect themselves so they can go home unharmed to their families,” he said.

“That means they’re allowed to use reasonable force, and it means people are going to get hurt if they try to assault a police officer,” he added, blissfully ignoring the well-documented fact that his officers routinely use unreasonable and unwarranted force on people who are not assaulting or posing a threat to them.

“I fully support the professional way they deal with those in the community who think it’s OK to threaten or assault police”.

Again, why Stevens made this comment when the video footage clearly shows Yates posing no threat to Higgins or the other officers remains unknown. 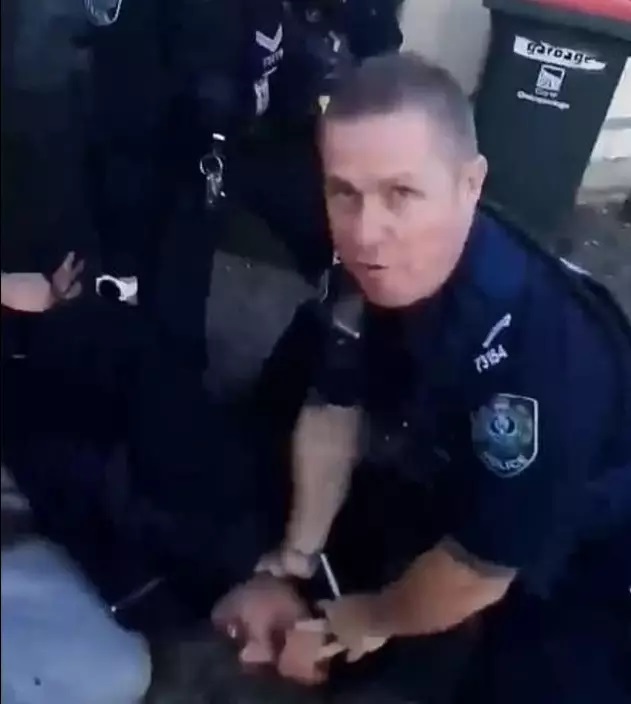 Senior Constable Ben Higgins after sucker-punching Yates and dragging him to the ground.

On 9 September 2020, Magistrate O’Connor acquitted Cross of the malicious charge of aggravated assault, which carries a maximum three-year prison term.

In her verdict, Magistrate O’Connor said Higgins “was not candid” in his statement and only one of the other officers had been a “candid, helpful witness who gave thoughtful, plausible evidence”.

The others, she said, had given opinions “as unreliable as their evidence” and made “misleading” statements “that place Higgins in the best possible light and blame Mr Cross for what happened to him”.

She said there was nothing in evidence to support the idea that an experienced officer such as Higgins would have “felt an arousal of fear” due to Cross’ behaviour. Higgins reportedly worked as a police officer in London before joining SAPOL.

Having finally been acquitted, Cross is now planning a civil lawsuit. Solicitor Andrew Carpenter said he would represent Cross because of his injuries and the malicious prosecution.

“If it was an ordinary member of the public that did this (to Cross) it’s something that should be investigated,” he said.

“It’s not in the community’s best interests to see police officers engaged in such acts and remain on duty.”

“What I’m seeing as an ongoing trend is individuals being charged with an offence as a way of attempting to justify the use of force against them.”