Since COVID-19 was declared a ‘pandemic’, the de facto leader of South Australia has not been the elected premier Steven Marshall, but unelected career bureaucrat and current police commissioner Grant Stevens (above). 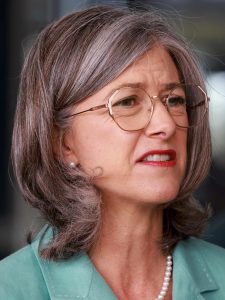 It is Stevens, with the approval of the Governor, who signs off on the so-called ’emergency directives’ that have severely curtailed the liberties of South Australians and caused thousands of job losses. All in the name of a virus with a 99.85% survival rate.

The emergency declarations in place since April 2020 each last for a period of 28 days. The Governor can extend the emergency declaration for a period of 28 days, and has allowed the COVID-19 Transition Committee to enact a perpetual state of emergency. The directives have been continually renewed since April 2020, and have severely impacted the physical, mental and economic health of many South Australians.

The legislation allowing this sad state of affairs is the Emergency Management Act 2004 (SA) and gives the State Coordinator (and Authorised Officers) essentially unfettered power to manage and co-ordinate the response to, and recovery from, the so-called COVID-19 ‘pandemic’ within South Australia. Intervention by the Governor in order to protect the rights and liberties of South Australians is unlikely, as state Governors are chosen by state premiers (the official explanation is that they are appointed by the Queen on the advice of state premiers). Events since April 2020 leave little doubt as to where the loyalty of every Australian Governor lies – and it is not with the people.

During a “Major Emergency”, Authorised Officers have broad powers to do whatever is deemed necessary to address the COVID-19 ‘pandemic’ within South Australia. Given the totalitarian powers this allows, one would expect a very compelling scientific basis for the emergency directives. The COVID-19 Transition Committee, however, has provided no scientific evidence whatsoever to support its COVID-19 strategy.

The Committee initially fought attempts to reveal notes from its meetings, and when they finally relented the reason was readily apparent. The meeting minutes, available here, are completely devoid of anything resembling medical science.

The emergency declarations, we have been repeatedly told, are based on “the best advice”. This is an outright lie, because the best advice should be based upon valid scientific evidence.

Until recently, this farce was allowed to go largely unchallenged.

They correctly assert that authorities failed to exclude all “obvious, alternative, compelling, reasonably practicable” alternatives that do not affect “common law rights or freedoms to bodily integrity”.

Unlike the transparency-hating SAPOL and SA Health, the plaintiffs want the trial livestreamed, and have secured a first-of-its-kind order protecting them from excessive court costs if they lose.

The subpoenas were issued after Stevens tried to worm his way out of a court appearance by claiming he would not be available to give evidence at trial, and that his staff had filed an affidavit on his behalf instead.

Counsel for Varnhagen’s group were critical of that document and of attached email correspondence between the staffer and Spurrier.

Varnhagen’s lawyers stated neither the affidavit nor the emails disclosed the scientific basis upon which the decision was made to require public servants to receive both vaccine and booster shots.

Less than 24 hours after being subpoenaed, Stevens suggested emergency laws and restrictions may end on April 1.

Then this morning came the surprising news that SAPOL has removed the vaccination mandate for its employees, allowing unvaccinated officers to return to the beat.

From Monday, March 7 at 7am, police employees who are not vaccinated can return to work, but must undertake a Rapid Antigen Test at the beginning of each shift and provide results to a supervisor.

They must also wear a “properly-fitted PFR mask” for their shift.

“The direction was issued to ensure Covid-19 did not significantly impact the ability of South Australia Police to serve the community,” a disingenuous SAPOL spokesperson said in a face-saving statement.

The mandate had been heavily criticized by the police union. Laughably, Stevens accused the union of fearmongering and not giving him an opportunity to paint a “less alarmist picture” of the situation. This is the very same commissioner whose COVID committee – which has repeatedly placed onerous restrictions on South Australians over the last 2 years – meets in private and long refused to reveal the contents of those meetings to the public.

Liberal senator Alex Antic had repeatedly sought the alleged scientific evidence that the South Australian mandates were based on. His FOI requests repeatedly hit a brick wall – until recently. Evidently feeling the heat, the SA Government again suddenly changed its tune and released a package of documents to Antic. As he explains in this interview, it was a very slim package of documents. It consisted mostly of meeting minutes, which again contained nothing in the way of science.

A Pandemic of the Vaccinated

The vaccines (which are not true vaccines but viral vector and mRNA gene therapies) are not only dangerous, but ineffective.

Among the many lies repeated by Spurrier is that these fake vaccines are highly effective at preventing COVID.

To the contrary, even the heavily manipulated clinical trials for these drugs failed to show efficacy. The Pfizer drug, for example, was widely touted as having 95% efficacy in preventing COVID. But when the outcome was recalculated in absolute terms instead of highly misleading ‘relative risk’, the true risk reduction was 0.84%.

Not even one percent.

Despite Pfizer’s best efforts to fudge the data, the reality is that more vaccine subjects died in its trial compared to control subjects who received a saline placebo.

Australia had a low rate of COVID cases and deaths until the vaccine rollout began. Since then, the case and death count has spiked upwards, as the chart below confirms. 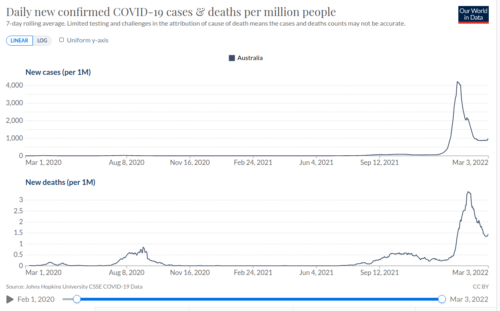 SA Health boasts that currently 92% of eligible South Australians have received their second dose of ‘vaccine’, and 68.6% have been administered boosters. It states there are 106 people with COVID-19 in hospital, and admits that 63 of those are fully vaccinated. The pathologically dishonest SA Health then hides the number of partially vaccinated people among the count by dishonestly grouping them together with the non-vaccinated: “21 people are either unvaccinated or partially vaccinated”, it disingenuously writes. It then claims the remaining 22 have an unknown vaccination status.

This means, at minimum, 60% of those hospitalized with COVID are fully vaccinated. The true figure is likely much higher, but hard to ascertain because SA Health is a pathologically dishonest and transparency-averse outfit that flippantly ignores Freedom of Information requests on the matter.

Thankfully, a small number of brave healthcare workers, such as the SA nurse in the video below, have spoken up about the true damage being caused by the new pseudo-vaccines.