In 2016, a grieving mother whose son was stabbed to death by her husband lodged a complaint against South Australia Police, stating she was ignored when she desperately needed help.

Despite frantically banging on the station doors for half-an-hour, she was forced to wait outside until 8am.

“I could see people in the station but they would not open the doors because it was not opening time,” Ms Trinne told NewsCorp.

“I understand protocols but when it is obvious something major is wrong you would think surely they would be able to realise this and act.”

In her formal complaint, Ms Trinne says officers were more concerned with why she did not know her husband’s registration number on his vehicle and said they “lacked empathy” when dealing with her.

Ms Trinne’s then-husband David Janzow suffers from bipolar disorder, and had slipped into a psychosis when he stabbed Luca to death on 8 July 2014.

The 38-year-old was arrested after he approached officers attending an unrelated crash scene while still covered in his son’s blood.

In 2015, a Supreme Court found Janzow not guilty of murder due to mental incompetence, and he remains in a secure psychiatric facility.

Further insight into the calibre of officers staffing the Norwood Police station can be gleaned from the picture below, taken on 22 September 2018. 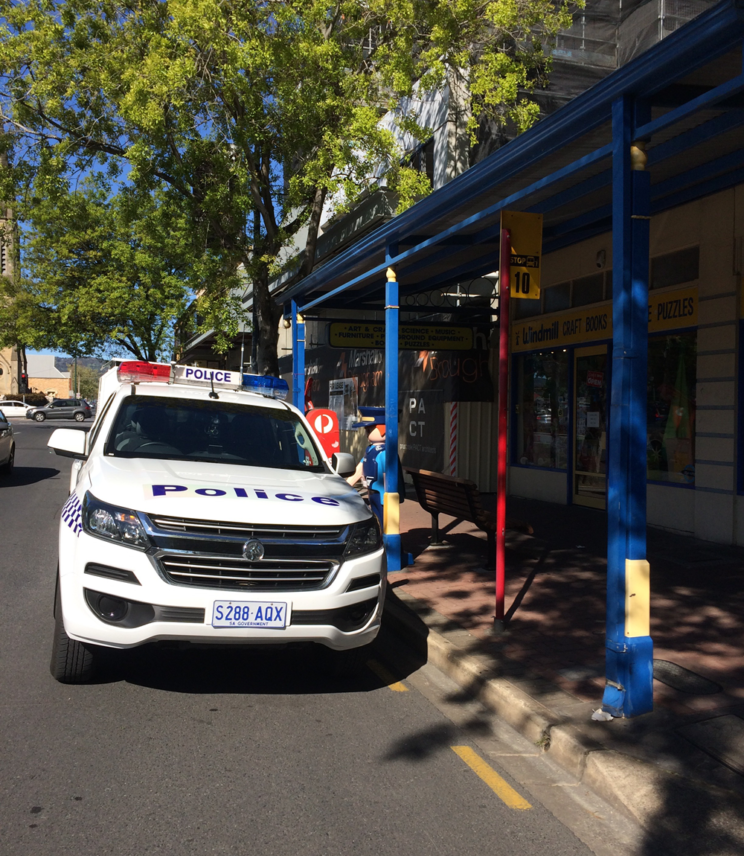 It shows a SAPOL vehicle illegally parked in a bus zone. As anyone with an Australian driver’s license should be well aware, this is a big no-no.

The location was the busy Norwood shopping strip known as The Parade. One of the shops in the immediate vicinity was a toy shop, and if you look closely you can see the vehicle is parked in front of a large Lego police figure.

Witnesses to this incident report the male police officer parked in front of the figure, then upon disembarking from his vehicle proceeded to swagger and attempt to flirt with two female shop assistants standing on the footpath.

Rather than swooning, the two females promptly concluded this officer was, to use common parlance, a complete wanker.

When the law-breaking SAPOL officer returned to his illegally parked vehicle, the person who took this photo approached him and politely quizzed him about his unlawful parking etiquette.

The failed Romeo’s response was not so polite.

“I asked him how much I would get fined for parking in a bus zone,” reported the witness. “He did not answer my question but got all defensive and tried to say that he was attending an emergency at the rear of the building. That is bullsh*t because that would have been the rear of our shop. When I pointed out that there was more appropriate legal parking available he got all sh*tty and left.”

This illegal act occurred on a sunny Saturday afternoon – a time when the popular Parade is at its busiest. In other words, SAPOL officers appear to be so convinced of their own exceptional status, they will illegally park in the middle of a busy shopping precinct. And they feel so self-entitled that when a member of the public rightfully questions them about it, they promptly get annoyed and irritable.

According to section 183(1) of the SA Road Traffic (Miscellaneous) Regulations 2014, the penalty for stopping in a bus zone is $137.

The errant SAPOL officer, however, was able to simply drive off without penalty for his unlawful transgression, despite it being observed by multiple witnesses.

This behaviour does little to refute the growing perception that South Australia Police are a law unto themselves, and feel fully entitled to behave like complete hypocrites.

Petrol “Drive Off” Thefts Spike Across South Australia, Police Do Nothing