As many South Australians have discovered to their dismay, SAPOL is far more interested in revenue-raising, assaulting people and covering up its rampant corruption than in fighting real crime.

This year marks the tenth anniversary of the horrific murder of Zahra Abrahimzadeh, an event that demonstrated how SAPOL’s warped sense of priorities can have fatal consequences.

On 12 February 2009, serial abuser Ziaolleh Abrahimzadeh assaulted his wife Zahra and eldest daughter. He also threatened to kill both their son and youngest daughter. Eleven days later, they packed their belongings into their car and drove to the Salisbury Police Station, in Adelaide’s northern suburbs, to report the incident.

Apart from issuing Ziaolleh Abrahimzadeh with an often useless piece of paper known as a domestic violence restraining order, SAPOL essentially did nothing. Apparently, bashing your wife and adult daughter and threatening to kill your family doesn’t warrant an arrest in South Australia.

But merely yell at an obnoxious Internet troll and accused sex predator who has been stalking you for years, and you will be arrested (and groped) by the sleazy SAPOL.

And while SAPOL doesn’t seem to give a damn about cyber-bullies and accused rapists using the Internet to stalk people for years on end, it was quick to charge a man who tracked down and exposed pedophiles with “using a carriage service in a harassing or offensive way.”

Thanks to SAPOL’s utter disinterest in bringing Ziaolleh Abrahimzadeh to justice, he remained free. This lack of consequence emboldened him to approach Zahra at a function in the Adelaide Convention Centre on the evening of 21 March 2010, and repeatedly stab her to death in a frenzied attack occurring in full view of shocked onlookers.

Murderer Ziollah Abrahimzadeh: Despite violence and continued threats towards his family, SAPOL literally waited for him to kill before arresting him.

“Ziaolleh was never dealt with by the criminal justice system for his alleged offending. That was because the first step in the criminal justice process, namely arresting and charging Ziaolleh for the reported offending, never occurred at anytime during those 13 months … In my opinion the single most important and decisive step in deterring Ziaolleh Abrahimzadeh from acting violently towards his wife was to arrest and charge him for his alleged offences.”

Had SAPOL been more interested in doing what it is supposed to do – namely, protect the public, instead of harass, extort and assault them – Zahra Abrahimzadeh might still be alive today. 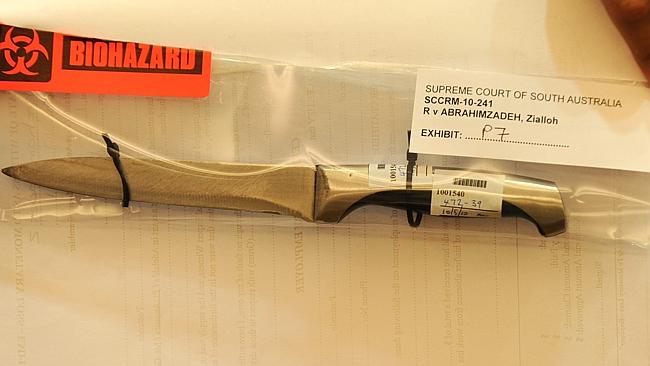 Thanks to SAPOL’s inaction, Zialloh Abrahimzadeh remained free to repeatedly stab his estranged wife to death at a public gathering.

Petrol “Drive Off” Thefts Spike Across South Australia, Police Do Nothing