As fuel prices spike across South Australia, so too does the incidence of petrol station drive-off thefts. Service station managers told Channel 7 they often send videos of the drive-offs to police, but rarely see any arrests or compensation for the thefts. This is despite many of the crimes effectively being pre-solved for the police, with footage clearly identifying the drivers, their vehicles and/or their license plates.

The photo above, for example, is taken from footage of a recent drive-off theft. The thief’s South Australian vanity plate, “HOTI 69”, is clearly visible. Locating the offender, a deluded woman whose self-appraisal of her physical assets is at stark odds with the video evidence, should be child’s play for even the dumbest police force. But as is so often the case with SAPOL, anything that doesn’t involve easy revenue-raising or harassment of those who stand up to police and government malfeasance promptly gets thrown into the “too hard” basket.

In response to enquiries by Channel 7, SAPOL could only cite a single instance of a case where it recently prosecuted a serial drive-off offender!

As many people who have ever reported a theft to the disinterested SAPOL will know, this is in keeping with the force’s longstanding tradition of lazy policing. The corrupt organization has forever claimed it lacks resources, but somehow always finds the manpower to carry out its less noble agendas. Witness the large police escort that accompanied SA police commissioner Grant Stevens to court on April 20, 2022.

The cowardly Stevens had been subpoenaed to appear in court and explain the science behind his never-ending series of anti-scientific “emergency” COVID declarations. Stevens had made a concerted effort to avoid fronting up to court, first claiming through an aide he would be “unavailable”. When that ruse failed, the allegedly jabbed-and-boosted commissioner conveniently came down again with “a virus”, after having already tested positive for COVID back in January (it seems the “highly effective” vaccine Stevens and his accomplice Nicola Spurrier bullied people into receiving didn’t work that well after all).

Two weeks earlier, Spurrier briefly appeared in court after also being subpoenaed by lawyers for the court action spear-headed by nurse and former AFLW player Deni Varnhagen. Spurrier is the forever-waffling chief health officer whose SA Health has repeatedly ignored FOI requests demanding the science behind the state’s draconian lockdowns and vaccine mandates. During her appearance, Spurrier was inexplicably excused from further court dates by a Justice Judy Hughes, who absurdly claimed there was no relevant evidence Spurrier could give to the matter (if the state’s highest-ranking health officer could not explain the ‘science’ behind the lockdowns and mandates, who could, exactly?!? Or was Hughes unwittingly acknowledging Spurrier knew there was no science whatsoever behind the draconian emergency declarations?).

Before and after her court appearance, Spurrier was briefly heckled by anti-mandate protesters outside the court. Stevens called their behaviour “disgraceful”, even though the non-violent protesters were simply exercising their democratic right to voice opposition to Spurrier’s extremely undemocratic COVID policies.

When it was his turn to appear in court, the diminutive Stevens was apparently so scared shirtless he ordered a large contingent of police officers to accompany him to and from the court. The picture below shows over a dozen of these officers standing idly outside the court while Stevens performed his best Colonel Schultz impersonation (“I know nothing!”) inside.

In the end, there were more cops outside the court than protesters, rendering the entire exercise yet another unnecessary waste of taxpayer-funded resources. Remember the image below next time you report a theft or offence to SAPOL and they claim they don’t have the “resources” to deal with it. 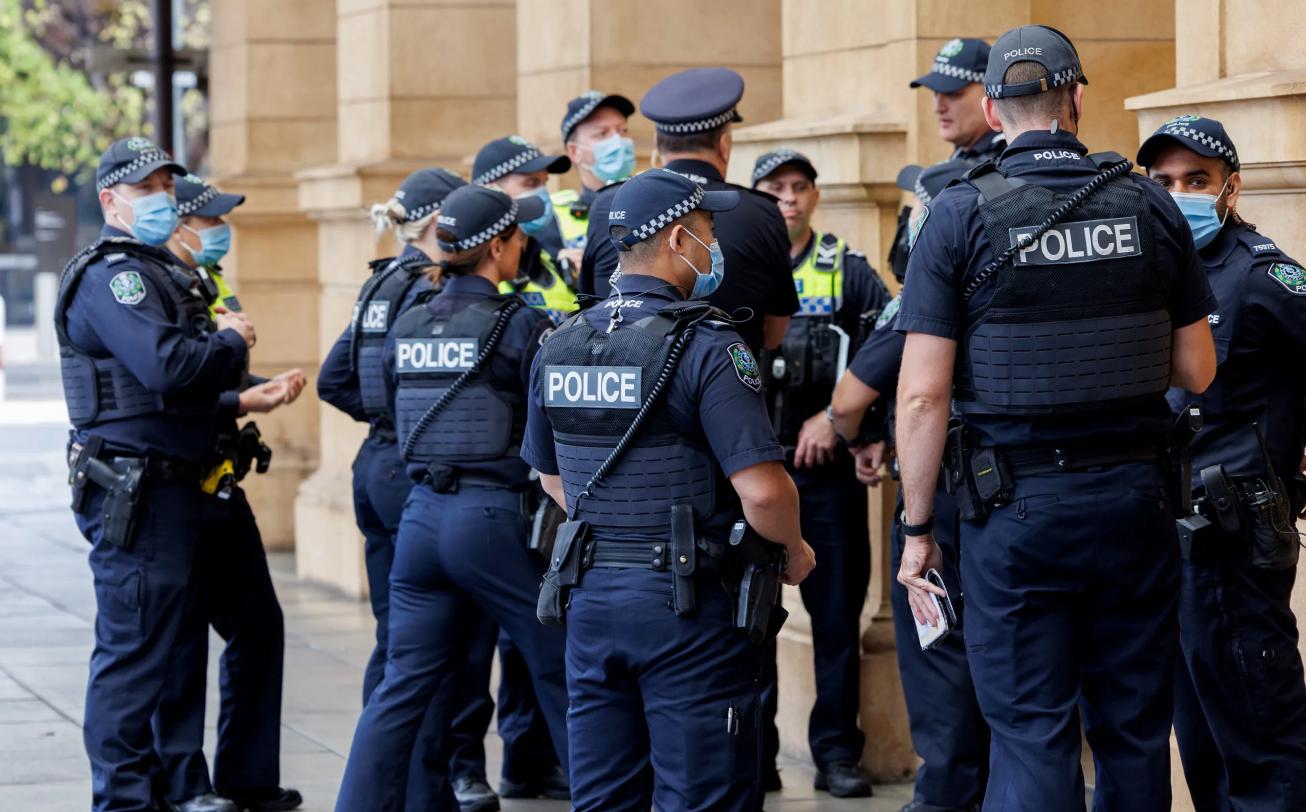 A large contingent of heavily-armed police accompanied cowardly SAPOL commissioner Grant Stevens to court at taxpayer expense. The large police presence was ordered by Stevens because he was clearly petrified by the possibility a small group of protesters might yell and wave signs at him. Domestic violence and sexual assault victims, in contrast, are typically expected to front court and face their attackers with only sympathetic friends and family for protection. This is what happens when you appoint a detached desk jockey to head a police force, instead of a community-minded officer with years of front line experience.

SAPOL’s Disinterest in Real Crime, and the Tragic Death of Zahra Abrahimzadeh